I’ve imagined writing this post for over four years—ever since I started this blog. At that time, I was revising my third middle grade manuscript, the one that would someday be called Spin the Golden Light Bulb. I was almost exactly two years away from signing with a literary agent, three years and four months away from signing a publishing contract, and four and a half years away from holding my first published book in my hands. You would think that in all that time I would have prepared for this—that I would know how to write this post, how to say what it feels like to see my story in hardcover form for the first time—on an actual bookstore book shelf.

But I wasn’t prepared at all. Sure I imagined it. But I can assure you that imagining it and experiencing it are not the same thing at all. And now as I  write this, trying to describe the time leading up to the moment I first held my first published book in my hands, all I can do is ramble. So if this post ends up being one big rambling series of events, I hope that’s okay.

I had expected to receive my hardcover author copies from my publisher a few weeks before release day. That’s the norm I had heard, based on what my publicist, my fellow debut authors, and other authors from my publishing house had told me. So, for oh so long, I imagined seeing my book in hardcover form for the first time when I unpacked the cardboard box and pulled back the package flap. I imagined staring at the beautiful cover as I carefully lifted my precious book baby out of the box and clutched it to my chest—like so many authors before me have done. I mean, that’s what I had seen all over social media, so of course I imagined that’s how it would happen for me as well. But I guess even when you live in a fairy tale world—like I do, when imagining an outcome that may or may not come true, reality sometimes steps in. Your outcome may be better than you ever imagined—or it may be crushed like a broken glass slipper right before your very eyes.

It was mid-December—about a month before Spin the Golden Light’s Bulb’s release day and likely the craziest shipping month of the year. My package of precious books was sent to me by my publisher and I watched for the mail truck every day. But little did I know, as I raced to the door every half hour like a little kid waiting for their new baby brother or sister to come home from the hospital, that my package was not coming. I had no idea that the package was lost in the same black hole that takes individual socks from the dryer. Only this black hole was the holiday mail rush—and I had no idea it was happening.

I was patient. I knew my author copies would arrive soon. Besides, I was so busy with the holiday rush, like everyone else on the planet, that I didn’t really agonize over the delay. Until I received a text from my sister—a text with a picture of my niece clutching my book to her chest. She was beaming. And my sister was gushing about how proud she was of me, that she knew I could do it and the hardcover copy of my book was absolutely beautiful.

My stomach dropped to my feet. Why…how did she have my book? Before me? I didn’t have the heart to tell her I hadn’t seen the finished copy yet. And so I didn’t.

A few days later my mother-in-law called, thrilled to tell me she was headed to the bookstore across town, to pick up her pre-ordered books. They were in and ready for pick up! What? Already? How? Why? But it was soon clear to me that the major bookseller was shipping their pre-orders out weeks early…and I was ready to throw up. How could this be happening? What good was a book launch or release date if people were getting their books early—before I had even seen them? I was just so frustrated.

Realizing I hadn’t received my copies yet, my mother-in-law decided not to pick hers up until I had mine, which was so sweet of her. So for the next few days, she waited, and so did I.

And just when I thought it couldn’t get worse, a friend tagged me in a post, sharing a picture of my book. She had also received her pre-ordered copy early too. Friends were commenting on a post that I didn’t get to share first. I guess I was a little heartbroken.

You may wonder at this point why I didn’t order a copy for myself right then. Well, I did consider that. But I just couldn’t. That wasn’t how this was supposed to happen. It wasn’t the way I imagined it. Besides, I knew my copies were coming any second, so I just pretended that no one had my book yet. Finally though, I told my sister what had happened and she offered every single day to bring her copy over to my house so I could see it. But I wouldn’t let her. I just couldn’t for some reason. Maybe it’s because that was her book—not mine. Maybe it’s because I wanted to see my book inside it’s cardboard box for the first time. I’m not really sure. I just know I didn’t want it to happen that way.

Over the next few weeks, I watched as more friends texted me about how beautiful my book was. Of course they had no idea I hadn’t received my copies yet. It wasn’t their fault that the retailer they pre-ordered it from, shipped their orders weeks before release day. And so I felt really, really guilty for being upset. I felt really, really guilty for not being happy that people had my book. The truth is, I was thrilled that people were getting my book. It was thrilling and it was exciting and I was so very grateful. But they had it before me and I won’t lie. I was disappointed. I had waited ten years for this moment and it felt like it was happening all wrong.

The holidays came and went and I was sure my package was on its way. Release day wasn’t until January ninth, the same day as my launch party. It wasn’t like I needed the books for the event since my local indie bookstore was handling book sales, but seriously, it was getting ridiculous. Where were my author copies? I had no idea! My publisher was doing all they could to track the package down and finally they had gotten a guarantee from the post office that I would receive it by January 6th, three days before the release date. I was thrilled they were finally on the way especially since I had planned to use one of the copies at my launch party—as a guest book. I really didn’t want to have to use my sister’s copy for that!

It was now January 6th, and it had been snowing in our city for four days straight. We had gotten 12 inches just the night before. My mother-in-law was worried about the weather and really wanted to pick up her copies before the driving conditions got bad again. How could I tell her no? I couldn’t, and so she set off to pick up her copies. I knew right then and there that if my copies didn’t come that day, I would see my book for the first time when she stood in my front door holding her copy out to me.

And later that day, as you might have guessed, the package did not come.

Beyond disappointed, I headed out with my husband on that snowy one degree winter night to watch my son’s track meet. I think my husband was as disappointed as I was and knowing my local indie was too far away, urged me to call the Barnes and Noble in the next town. Maybe, just maybe they had gotten the book in stock already and would sell us one early. The sales clerk took pity on me, told us they had ordered some for their stock, and told us to come right in. So, as the snow fell—again, we took a detour from the track meet, headed to the bookstore in the town where I grew up, and got in line—to purchase my own book.

You would think that this bothered me—having to do this, but it didn’t. After thinking that someone  (even someone close to me!) was going to knock on my door to show me their copy of my book, I realized I wanted to see it on my terms, and this was the way I decided it would be.

So as I stood at the counter of Barnes and Noble, while my husband bought his copy of my first published book, the sales clerk handed my book baby to me. I stared at the cover, all sparkly and beautiful, and squeezed it tight. I stared at it for a long minute before handing it back to her so she could place it in the bag. It happened so fast that I don’t think it really hit me, that my story was now a real live book.

Before we left the bookstore, my husband asked me to show him again where the book would be shelved on release day. And so we marched over to the children’s section. Neither of us expected to see it of course, but as I approached the end of the alphabet in the Young Readers 7-12 section, I pointed and told him, “Eventually, it will be right over—gasp*!

And right there—sitting on the shelf, there it was—my book—facing out!  My husband gasped too (I think at the same time!) and I couldn’t believe my eyes. For all the imaging I had done over the last several years, months, and weeks, nothing could have prepared me for that sight. I saw my book baby for the first time, in a bookstore in the same town where I grew up, with the person who has been by my side through this entire fairy tale journey. And that moment, even though different, was better than any moment I ever imagined—any moment spent simply staring at a cardboard box.

And so, I clutched my book baby to my chest and it was a feeling I can’t quite put into words. 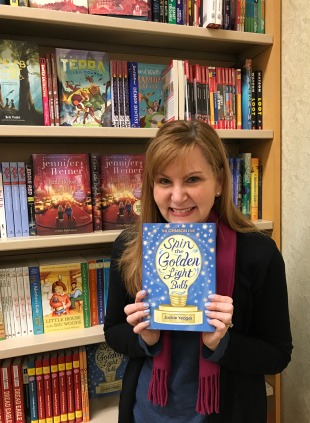 My publishing team felt horrible through this whole mystery. But in my mind they have nothing to feel horrible about. They turned my story into a beautiful book and made my dreams of publication come true. And in case you’re wondering, my author copies did eventually arrive. And the package was simply perfect. 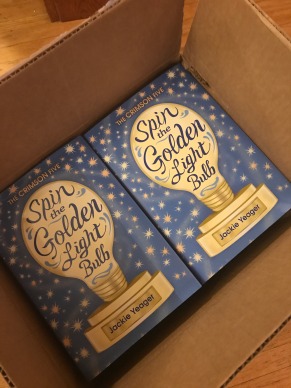 And it doesn’t bother me anymore who saw my book before I did, because every single person who did, has meant so much to me and to my journey in their own way, and I’ll always remember their messages and posts for what they were…heartfelt and full of love and support for me and to my first published book.

Thanks for reading this long rambling post, and for the love and support you’ve shown me these last few weeks. It has meant absolutely everything to me. Next time I’ll be posting about release day, and like any good story is, it was filled with quite a bit of drama too! I can’t wait to share that one with you as well. 🙂

Have a great week, my friends and like it says in Spin the Golden Light Bulb...